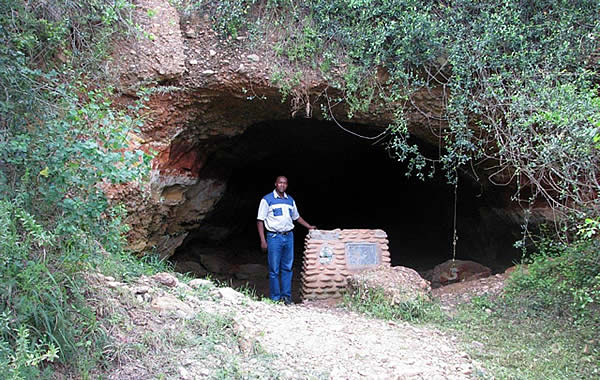 The first irrigation scheme on the Klein Rivier in the Gamtoos Valley was started by James Wait in 1827 and completed in 1830. It extended for 3.5 miles and he was awarded 50 cattle and the use of 50 workers.

People came from far and wide to view the spectacle and Dr John Philip, the superintendent of the London Missionary Society (LMS) declared it the greatest work of its kind ever undertaken in the Colony. Part of this irrigation scheme can still be seen today and forms part of the Hankey Golf Course.

The second irrigation scheme on the Gamtoos River was carried out by William Enowy Philip, the son of Dr John Philip. His inspiration was the window in the hill between Backhousehoek and Vensterhoek and was dug using pick and shovel and wheelbarrows. The length of the tunnel is 228 meters and the speed of construction was very slow – about 1 to 2 feet a day. It was started in April 1843 and completed in August 1844 – 15 months later. It was in use from April 1845 to 1970 – a period of 125 years. This was the first ever tunnel scheme in South Africa.

Tragically, two weeks after the tunnel was completed, William Enowy Philip and his cousin drowned in the Gamtoos River where the present low water bridge to Milton stands, when their small boat overturned at the Milton drift.

Phillip’s Tunnel is protected as a provincial heritage site.