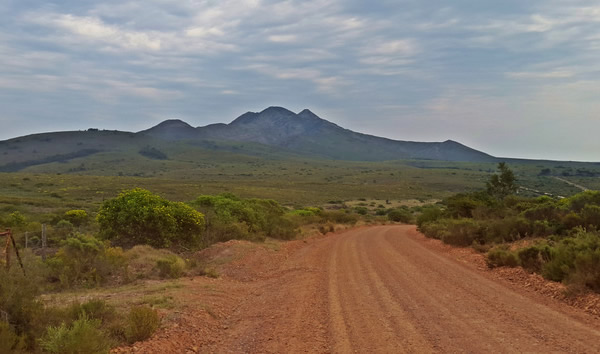 The small town of Patensie is the eastern gateway to the Baviaanskloof, as it virtually lies at the mouth of the Baviaanskloof Wilderness Area. It is largely a citrus producing area, however the name is something of a corruption of the Hottentot expression ‘where the cattle lie’. Other produce includes potatoes, tobacco and chidory.

Just outside Patensie is the Kouga Dam, the lifeblood of the valley, which also supplies Port Elizabeth with most of its water.

Initially called the Paul Sauer Dam, the construction of dam in the 1960’s and early 1970’s led to much land being bought out and transferred to the Department of Forestry. It was the first double-arched dam in the country and there is a short tunnel just before the dam, dated 1969.

Further to the west lies the Baviaanskloof Wilderness Area, of which 189,000 ha (467,000 acres) of this spectacular place are currently protected in the Baviaanskloof Conservation Area. An interpretive centre is a good turn around point to complete a 60km scenic drive.

Coming back you will view Queen Victoria’s profile in the conglomerate cliffs along the Gamtoos River (it is only visible from the west). A scenic drive to the Kouga Dam and start of the Baviaans via Andrieskraal is about 100km long.