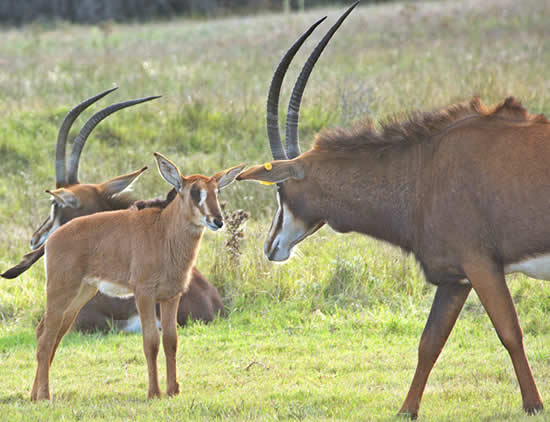 Kabeljous Nature Reserve is located north of Jeffreys Bay and offers the visitor a 2.5km coastline complete with dune thickets, forests, bushveld and wetlands. For the avid hiker there are various 3 to 7km walks – you may be lucky enough to see bushbuck, duiker, bushpig, grysbok, caracal, mongoose or even some of the 100 species of birds that are found in the reserve. A picnic area is available at the Estuary.

Seekoei Nature Reserve is a spectacular celebration of the natural beauty of the Eastern Cape. It is perched between the idyllic retreats of Aston Bay and Paradise Beach.
The Reserve occupies a total area of more than 60 hectares (about 150 acres). Itsgeographic location, on the estuary formed by the confluence of the Swart River and the Seekoei River, adds another dimension of beauty and natural abundance. A large portion of the reserve can only be reached by using a small pontoon (a flat boat).

The natural vegetation consists mainly of Kaffrarian thicket, which is characterised by semi-succulent, thorny plants that form a dense floral profile. There are also areas of river and coastal scrub, which adds greenery and lushness to the reserve, and spectacular coastal fynbos, which is endemic to South Africa.

The flora found here is the natural habitat for a number of animal species, including more than 120 different kinds of birds. Wildlife that can be spotted here includes different duikers, bush pig, caracal, mongoose, porcupine, the ungulate tortoise, and the spotted genet (or Cape genet). Notable birds include the magnificent fish eagle and the fascinating flamingo.

There are a number of hikes and walking trails through the Seekoei Nature Reserve. These range from 1km to 3km, the former of which includes a bird hide and the latter a
river crossing.

Noorsekloof Nature Reserve is a small 28 hectare reserve in the suburb of Noorsekloof, in Wavecrest, Jeffreys Bay. The nature reserve is roughly 200m wide at its narrowest, widening to about 400m in the heart of the kloof. It lies in amongst homes and neighbourhoods, and an adjoining narrow greenbelt connects it to the beach. Its narrowness, and the fact that it lies in amongst residential development, places it under constant threat. The Noorsekloof Reserve is predominantly valley bushveld, a plant type that has received little publicity, unlike fynbos, and is thus barely conserved. Valley bushveld occurs in hot dry valleys and rivers and is dense, sometimes even impenetrable thorny or succulent shrubs. Over 50 bird species, including the Knysna loerie, Knysna woodpecker, and paradise flycatcher make the reserve their home.

A beautiful 3km trail alongside a stream begins at the entrance to the kloof in Eland Street, ending in Dogwood Circle. Because the Noorsekloof Nature Reserve is essentially a long strip of green through the suburbs of Jeffreys Bay, it is in parts barely visible for the homes. The green belt that feeds in from either side functions as a green lung for residents.