Port St Francis, South Africa’s only private working harbour is situated in St Francis Bay, and home to the squid industry. The squid, normally referred to as ‘chokka’, is mainly exported to Europe. 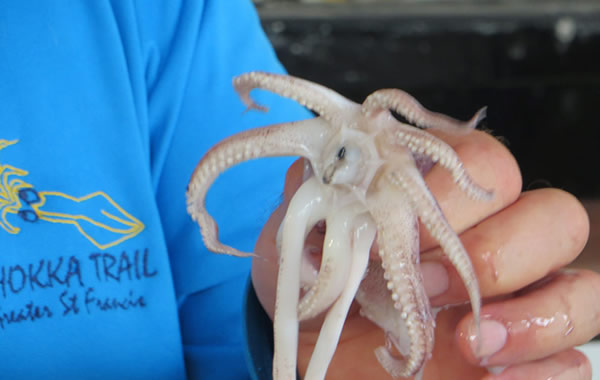 Chokka (Loligo vulgaris) is only caught by means of a hand line attached to a special coloured lead jig (with multi hook head) and a plastic colourful float, both called dollies. The two dollies are connected to about 50m of 19kg or 22kg fishing line, wound around a piece of wood, giving the fisherman something to control the line with.

Crew can catch with two lines at a time, but experienced crew can manage up to four lines at once. The chokka is caught on the sea bed, but can also be caught just a few metres below the surface, when they are in a feeding frenzy. At this rate catches of up to 5 tons can be caught in a few hours with a crew between 21 and 26 men per vessel. They catch mainly at night, as huge halogen lights attract the different species of fish the chokka feeds on. When the fisherman lowers the jig into the water, the little hooks catch the chokka’s tentacles and when he feels the weight on the line he pulls it up. The fisherman throws his catch into a crate and tries for the next one. The chokka is then neatly finger laid into a stainless steel pan, sorted according to size and blast frozen at -40°C on the vessel. Once frozen, it is then packed in a plastic bag and sorted in the holding room until offloaded at Port St Francis.

These vessels are indeed sea based factories, and can stay out at sea for up to three weeks. The industry is well regulated, as vessels are only allowed to carry crew according to their total amount of permits. Closed fishing seasons are also implemented to further protect the specie.

The hake industry is controlled by a yearly quota system, granted to boat owners on application every five years. These vessels go out to sea for up to three days, taking with them enough ice to keep their product as close to 0°C as possible. They offload whole gutted hake, re-ice the fish immediately, pack it on ice bags into large polystyrene containers and is flown out to mainly Spain on the same day. Ice is made in the ice plant, or huge white tower overlooking the fleet.

Pilchards netted in our waters are mainly used as bait. These boats go to sea with adequate ice to chill the pilchards, a process that is repeated when landing and offloading at Port St Francis. It is then sorted at the factory according to size, packed into boxes and blast frozen at -40°C.